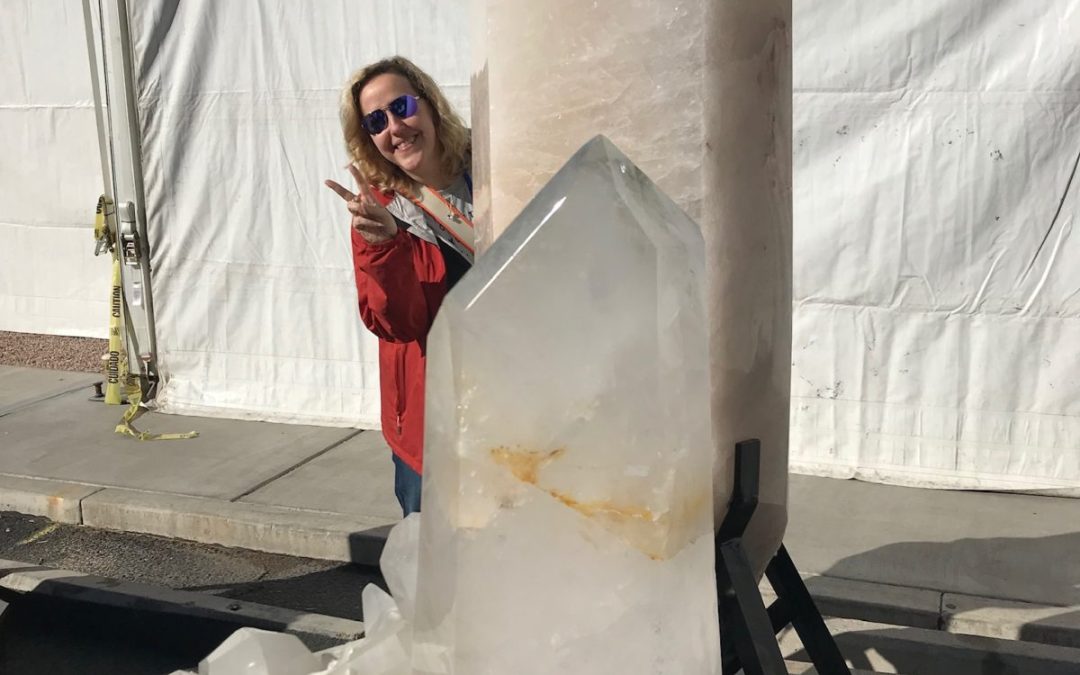 During the first week of February, I went to the Tuscon Gem and Mineral Show for the very first time. It was fantastic, and not at all what I expected. Before I go on, let me tell you a couple of important things:

Number 1 –  it’s not a single “show.” No. It’s a month long event, full of more than 40 or 50 registered showcases, each hosting hundreds and hundreds of vendors, all housed under enormous white tents that dot the city. And, in addition to the overwhelming number of official options (e.g. Kino, GL&W, JOGS) there are also a myriad of smaller events peeking out of hotel and motel parking lots lining the highway. Basically, everywhere you look, you see folk buying and selling sparkly rocks. It’s a massively magical event.

Number 2 – before I arrived in Tucson, I knew none of what I just told you about the show. Looking back, I realize that I was very naïve about everything, but I don’t think that was a liability. In fact, going without any expectations was a wonderful way to experience the sheer magnitude and wonder of “The Show”. I left Minneapolis focused on establishing primary connections with the people who make/carve/import the stones I work with. That was it. I know it was a big goal; I crushed it.

Number 3 – going with a friend who mirrors your level of rock nerdiness is super important. There are miles and miles of tables covered in stones and only a finite number of hours in the day. Only another gem freak would scan the sparkly treasures without even considering a break unless they were super hungry. Enter my friend Kari. Together, we made quite a team, and I’m thankful that she was as excited as I was to go on this adventure.

We flew into Tucson on a Monday afternoon, picked up the rental car, whooshed to the hotel, dropped our bags, and promptly turned back around and headed out. First stop? The Kino Show.

We got there 90 minutes before closing time, so we walked quickly, power scanning tables for unique and interesting finds. We quickly realized that in addition to the large multi-vendor tents, there were also smaller single vendor ones hiding around the periphery. One small tent displayed a big sign saying “Bumblebee Jasper” and I knew I had to check it out. I’ve always gravitated to anything related to honeybees because that’s what my name, Melissa, means in Greek. The tent was full of stone; half of the tables were covered in raw, uncut rocks, and the half filled with boxes of carved stones and cabochons. I’m not a lapidary, so I turned to the finished stone side and promptly fell in love.

And the energy? Ohmigoodness. The stone made me feel happy from the moment I first touched it. It was warm and sunny like the color suggested it would be. Holding the stones left me feeling optimistic and light. It was wonderful.

Alas, I couldn’t find any drilled beads in the tent, nor any nuggets that I could buy and drill on my own. But that was ok because I now had a new quest for the trip – bumblebee jasper beads. I knew they had to be somewhere and I would find them.

The next day we went to the JOGS show, another HUGE showcase offering hundreds of both primary and wholesale vendors from all over the world. Again, Kari and I walked purposefully up and down the narrow aisles, looking for unique cuts and colors among the table ocean of gemstones. In an instant I spotted the unmistakable bumblebee colors in the middle of a red wave of garnets; success! The vendor had two shapes available, oval and bar. I was lucky that I found them when I did because there were only a few strands available of each, and I snatched them all up.

I will be honest with you, I had never heard of Bumblebee Jasper before Tuscon. I think that’s why I was so quickly smitten; it was new to me, absolutely gorgeous, and full of energy.

In a nutshell, Bumblebee jasper is formed from the runoff at the base of an active Indonesian volcano. Because the volcano is ACTIVE, the stone can be dangerous to mine, making supply limited. Bumblebee is comprised mostly of sulfur with hematite and other sediment woven into the compacted volcanic ash. Some sources state that there are traces of arsenic in it, too (a bigger risk for lapidaries and gem infused water enthusiasts, I would imagine, than the random jewelry wearer).

I’m happily working with the stones I brought home with me. For now, I think both the ovals and the bars could be I AMuleT talismans, but since they are so stunning all by themselves, I might put them on a simple leather cord, too. I’m undecided, but simpler is often better, don’t you think?

I will write more about subsequent Tuscon finds as I work with them. Trust me. There were lots of excellent discoveries to share with you!!

Happy Monday! Nominations for the @twincitiescoll

Here you go - all the markets I currently have sch

For guaranteed delivery by holidays, last date to order for Hanukkah gifting is Thursday 12/8/22, and Thursday 12/15/22 for Christmas. Orders received after these dates may not arrive in time.