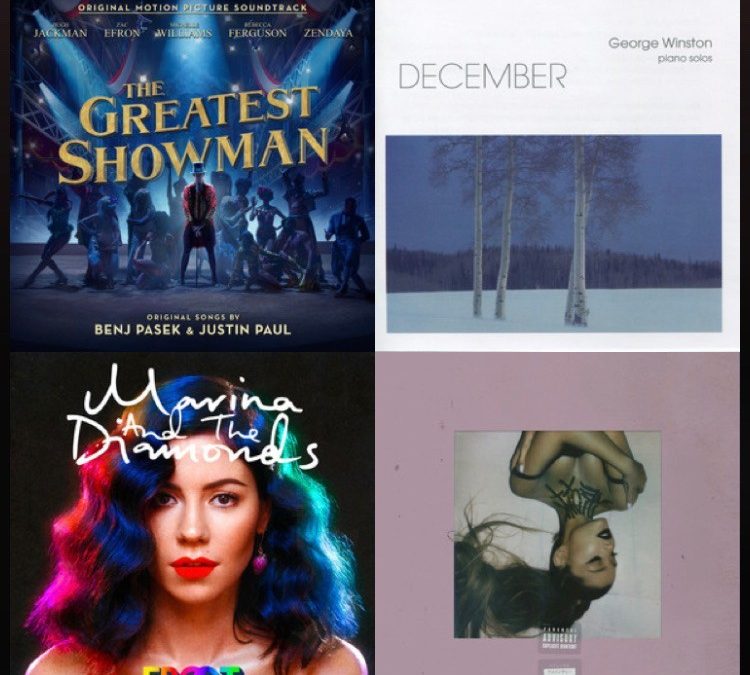 Music is my omnipotent influencer; it affects my mood, memory, creativity, and productivity. I can honestly say that if all music disappeared tomorrow, so would I. It’s THAT important to me.

I can chart my life by songs and artists, a personal soundtrack of sorts. It’s easy to revisit memories and past feelings by simply dipping into my mind-heart playlists any time I want to. Some artists (Billy Joel or Sting) span multiple transition points, while others (Deelite or La Bouche) pinpoint only one specific moment in time (um, hello 1990s!). To be sure, no one wants to relive hurtful memories, but the emotions and lessons learned during those events are always important for growth and perspective. Music provides a safe way for me to do that, too, without having to hold onto the whole, messy memory enchilada.

Often when I feel scattered, stressed, and unproductive, I turn to songs to help me stay on track. In high school, I remember coming home after classes, plopping down on the couch, and studying to the sound of MTV. I know the whole point to MTV was to watch music videos, but I routinely turned the TV screen off; I only wanted to listen to the songs! Sure, I could have used the radio, but it was way more comfortable to sit in the family room. And besides, it felt cool saying “my parents let me study to MTV”.

In college, my homework (and surrounding distractions) increased exponentially. I learned quickly that if I wanted to get any work done, I had to study either in complete silence or surrounded by music.  Somewhere around my sophomore year, I discovered THE BEST term paper muse, George Winston. I was working on a paper that was D.E.A.D. (the going-painfully-nowhere-slowly kind of dead) and my roommate was playing Winston’s December on the stereo. I didn’t think that I was really paying attention to the music, but when Carol of The Bells came on, relevant thoughts came in a downpour, gushing onto the page. It was an otherworldly experience. To this day, there’s still something about that album that kicks my brain into high gear. I don’t know why it works, but I’m not questioning the process; I’m grateful that it remains a powerful tool in my creative arsenal.

Now that I’m working and designing from home, I listen to music all day long. Interestingly, the playlists that I cue up for time spent at the workbench are different from the general background music of daily life. I’m ok with listening to the radio when I’m not at the workbench because usually I don’t need to be super focused to do routine house stuff. Radio play is random, and the distracting ads and other bits don’t bug me. But when I want to focus on making jewelry, I prefer songs that hold me in the right frame of mind. My playlists have some reliable standards that I’ll play on repeat, but I like to bring in new tunes from time to time to mix things up.

Why am I telling you all of this? Because of a book I read a while back by Austin Kleon called Show Your Work . In it, Kleon discusses the importance of bringing folk into your creative process if you want them to develop interest in your work. I’d like that, and so, I’m taking his advice. I do already post pictures of various projects on Instagram, but to really get an idea of how I work and create, I think you might like to hear what I’m listening to, too. So, starting this month I will put up a Workbench Playlist. I cannot promise that it will change very much, as I’m a creature of habit. I know you’ll always find some George Winston on the list. But, who knows? I do mix things up occasionally.

And so, without further ado, here’s my current Spotify list with a smidge of commentary:

The Greatest Showman Soundtrack: Why? Because I have a crush on Hugh Jackman’s voice. Full stop. In addition to THAT VOICE, the music ebbs and flows in just the right rhythm and speed for my brain. It’s good.

Marina and the Diamonds: This person/group is one of my daughter’s favorites right now and I like to listen to what she’s playing. The music has a nice background groove, but I’ll admit I’m not really paying much attention to the lyrics.

Ariana Grande: This one surprises me a bit because I’m not always a big fan of current pop. I’ll admit that I can’t understand her words a lot of the time, but that’s ok; I like the tone of her voice and the flow of the music.

Come Along by Cosmo Sheldrake: I discovered this song because of a visually enticing TV ad. Also, the lyrics include the word Heffalump … which is from Winnie the Pooh, and, c’mon. Winnie the Pooh? Creativity jackpot! Another bonus is that this single’s printed cover has colorful FISH on it, which is also creatively cool. I like to imagine the swirling colors as the song plays.

Les Miserables Movie Soundtrack: Not all of the songs from this one, just a few. The music is big and expansive which I love, and … well… Hugh Jackman again.

Pat Benatar: An original female rocker. I loved everything about her when I was in high school, and I still do; she’s fearless and her music is infectious. I can’t NOT sing along.

There you go. I’ll admit it’s kinda short, but so what? It plays on repeat anyway.

P.S. What music are you listening to right now?

Are these earrings in the Val/Pal/Galentine's Day

This is @kristi.hemmer, the amazing, brilliant, in

Use VDAY22 at checkout for FREE velvet gift pouch with purchase!