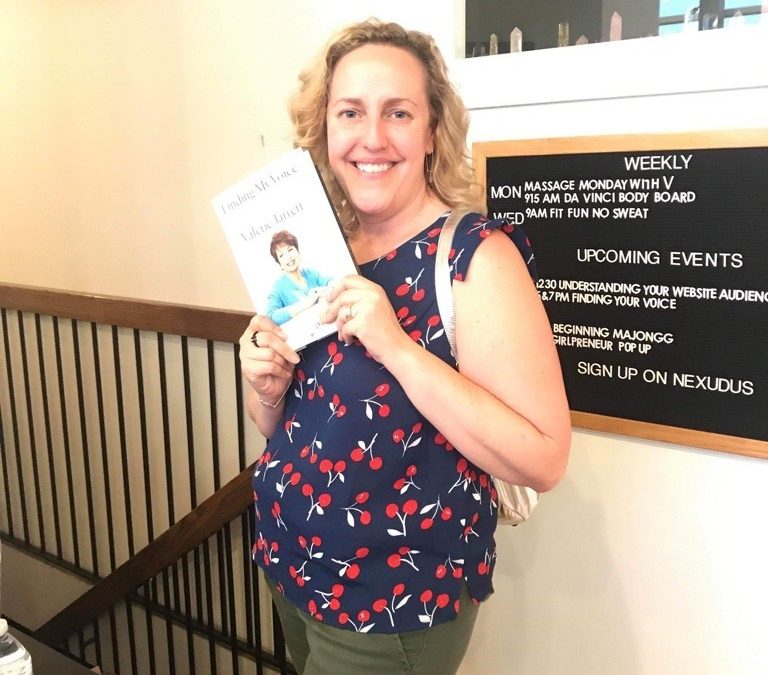 I belong to a cooperative working space in Minneapolis called ModernWell; a creatively magical place where I can write, dream, and network, while still checking items off of my To Do list.

In addition to working next to brilliant women, ModernWell membership often provides front row access to amazing authors such as Dani Shapiro, Ingrid Fetell Lee, and most recently, Valerie Jarrett. Ms. Jarrett was a senior advisor for President Obama throughout his two terms in office, and the moment I learned she would be coming to our workspace, I reserved my ticket for her presentation.

In the days leading up to the book event, I realized that the I Am True talisman was a natural fit to her story. I decided to make an I AMulet for her and hoped I would be able to give it to her personally. Since there was no formal meet and greet advertised, I asked Julie Burton*, the owner and creator of ModernWell, if there might be an opportunity for me to present Ms. Jarrett with a small gift. Julie didn’t know for certain, but told me she’d ask.

The event was well attended, but not overcrowded. I arrived a little early, eventually finding a spot to sit that wasn’t too far toward the front or the back. But, before I could settle in, Julie was at my elbow saying, “follow me!”

…and was led back to meet Ms. Jarrett! She was kind in sharing some time with me, even speaking briefly about life outside of her memoir. She graciously accepted my gift, offering me a hug in return!

I couldn’t have asked for anything more.

I returned to my seat feeling full of heart and thoroughly enjoyed the rest of the evening. Ms. Jarrett was both inspirational and grounded. I scribbled down different quotes over the hour that she spoke, but one that I really appreciated was in response to how she regards life events when they don’t go the way you want/hope/expect them to, even when you give it your all. To these situations, whatever the issue, her advice was to not frame the result as a personal failure, but instead realize that “it might not be [because of] a weakness … just not a good fit.”

I don’t know about you, but I’m often too quick to claim fault in myself when things don’t go as planned. I don’t know why. I just do. But, deep down I know that I’m not responsible for the world, nor the smooth sailing of every boat that shares my lake/ocean/stream.

I’m a work in progress.

Anyway, I went home with a personally autographed copy of her book, feeling uplifted and happy.

The next night I found myself on the couch watching The Rachel Maddow Show, and guess who was on?

And, guess what she was wearing?

THE I AMULET I HAD GIVEN TO HER THE DAY BEFORE!

Ms. Jarrett chose to wear the I AMulet I made for her simply because she wanted to.

This was the sign I didn’t even know I needed.

Sometimes I think folk consider my I AMulets as too discordant with a career as a physician, because doctors are supposed to shun anything considered as “woo”. And, because I have a anxious imagination, I also worry that people only tolerate my creative work and ideas because they want me to be happy. Even in writing this, I’m nervous about what you might be thinking as a reader. But, maybe it doesn’t matter what you, or anyone else really thinks. Creating I AMulets, writing the affirmations, and crafting each component by hand, is deeply satisfying to me. And, when people are drawn to my work, for whatever the reason, I am happy to my core.

I gave a gift of myself that was accepted and used.

*ModernWell is the brain child of Julie Burton. Julie is a genesis maven, birthing more than one creative endeavor over the past decade, some solo and some collaborative. The Twin Cities Writing Studio (TCWS) is one such project; a marvelous group dreamed into existence with the talented writer, Nina Badzin. I joined TCWS in its inaugural year, and credit both the energy and wisdom of my TCWS “Thursday Girls” for the creation of Peanutmark.com, and ultimately Melissa C Mark Jewelry. Both endeavors had been stewing amorphously in my brain for a very long time, and TCWS was the anchor I needed to blaze the trail forward. I am forever grateful.

I even made the paper!!

Happy Monday! Nominations for the @twincitiescoll

Here you go - all the markets I currently have sch

For guaranteed delivery by holidays, last date to order for Hanukkah gifting is Thursday 12/8/22, and Thursday 12/15/22 for Christmas. Orders received after these dates may not arrive in time.